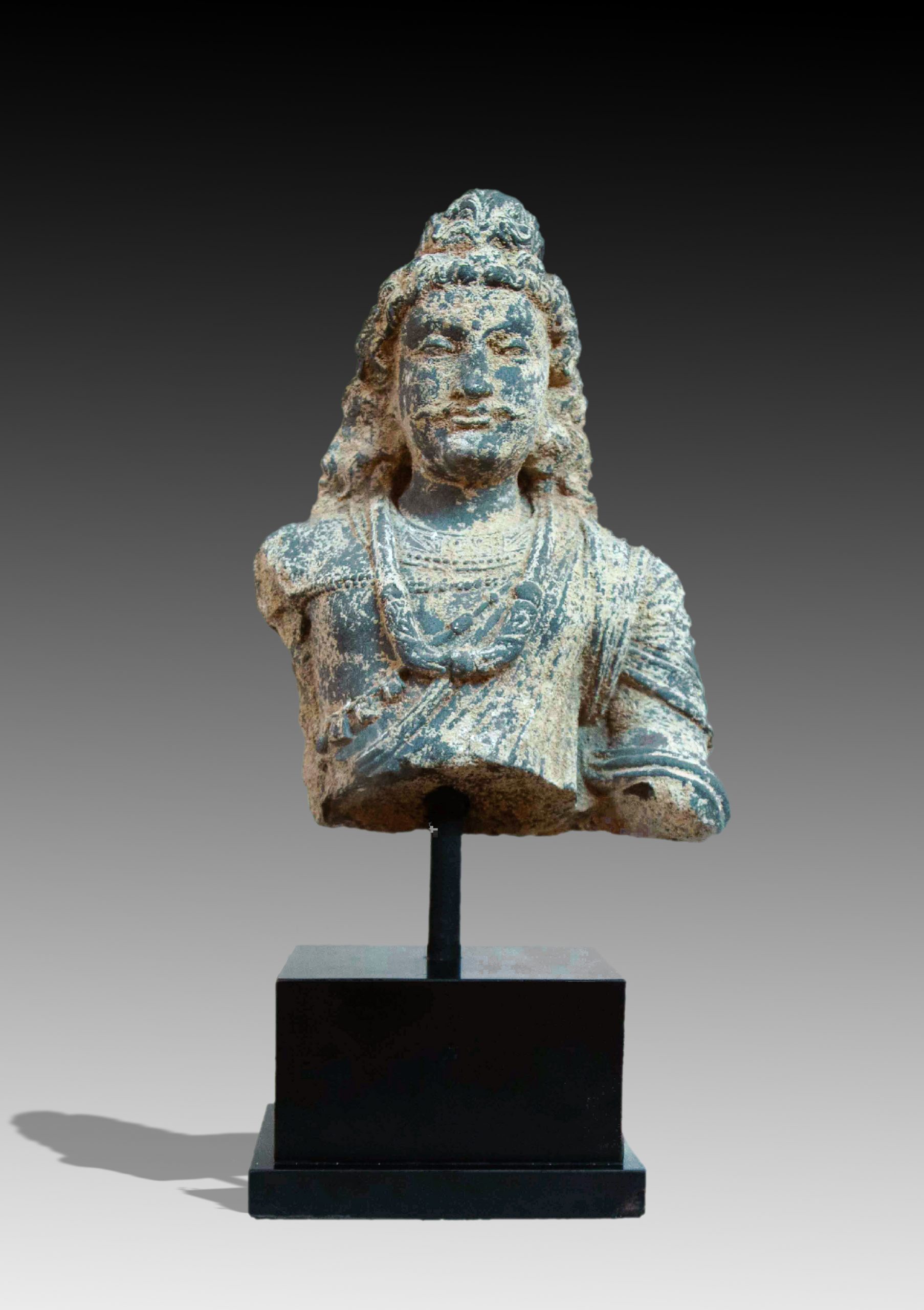 On the North-Western border of India, in the mountain territory covering the present states of Pakistan and Afghanistan, an extraordinary artistic civilisation developed over the first centuries of our era. Its artistic production is being denominated as 'the art of Gandhara', from the original ancient name of this region. This region was intersected by the famous Silk Way, the caravan trail linking the Western world to China and the lowlands of Central Asia. This region also went from Persian hands to Greek rule after Alexander the Great Conquest. It stayed open to contact with the Indian civilisation as well as with the remote regions of the Roman empire.[1]

The fact that this artefact displays a unique combination of artistic elements that derive from different civilisations can be explained by the presence and influence of varying civilisation ruling over or trading with the Gandhara region. The period during which this sculpture was made (305 BC and 450 AD) explains the significant Greek stylistic influence which is also visible in many other Buddhist religious sculptures of this period in Gandhara (Buddhism was the prevalent religion of the time).[2] For this reason, the art made during this period is generally denominated as Greco-Buddhist art of Gandhara.

Throughout cities and monasteries in Gandhara, a remarkably eclectic art with international influences and inspired by Buddhist religious belief was blossoming during this period.[3] Anthropomorphic representations of Buddha first appear in Gandharan art before spreading across the Asian continent. In particular, this sculpture represents a Bodhisattva (A Bodhisattva is any person who is on the path towards Buddhahood and believes one's destiny, and that of all of humanity lies within oneself).[4] This is hinted by the clear presence of an Ushnisha, the three-dimensional oval protuberance on top of the head which resembles a topknot. This cranial protuberance called Ushnisha was considered as one of the 32 marks of Buddha. This artwork was connected to a wall piece, the halo that usually surrounds the head of a Bodhisattva may have been embedded in the wall from which the artwork was removed. The figure is also wearing a traditional Kushan moustache (from Kushan influence which depicts Kushan rulers with a think horizontal moustache). The Bodhisattva is wearing a finely decorated pectoral piece adorned with interlacing necklaces.

Condition: Excellent condition considering the age of the piece. Presents some natural wear from time erosion typical of antique pieces.

Provenance: From French Private Collection, sold twice through auctions. A permanent export licence from the French government is available to certify that the ancient artefact left France legally. Expertise by Mr Herve Naudi, French international expert and authority on Gandharian and Asian artefacts.

[2] Rowland, B., ‘Bodhisattvas or deified kings: a note on Gandhara sculpture’, Archives of the Chinese Art Society of America, 15, 6-12.