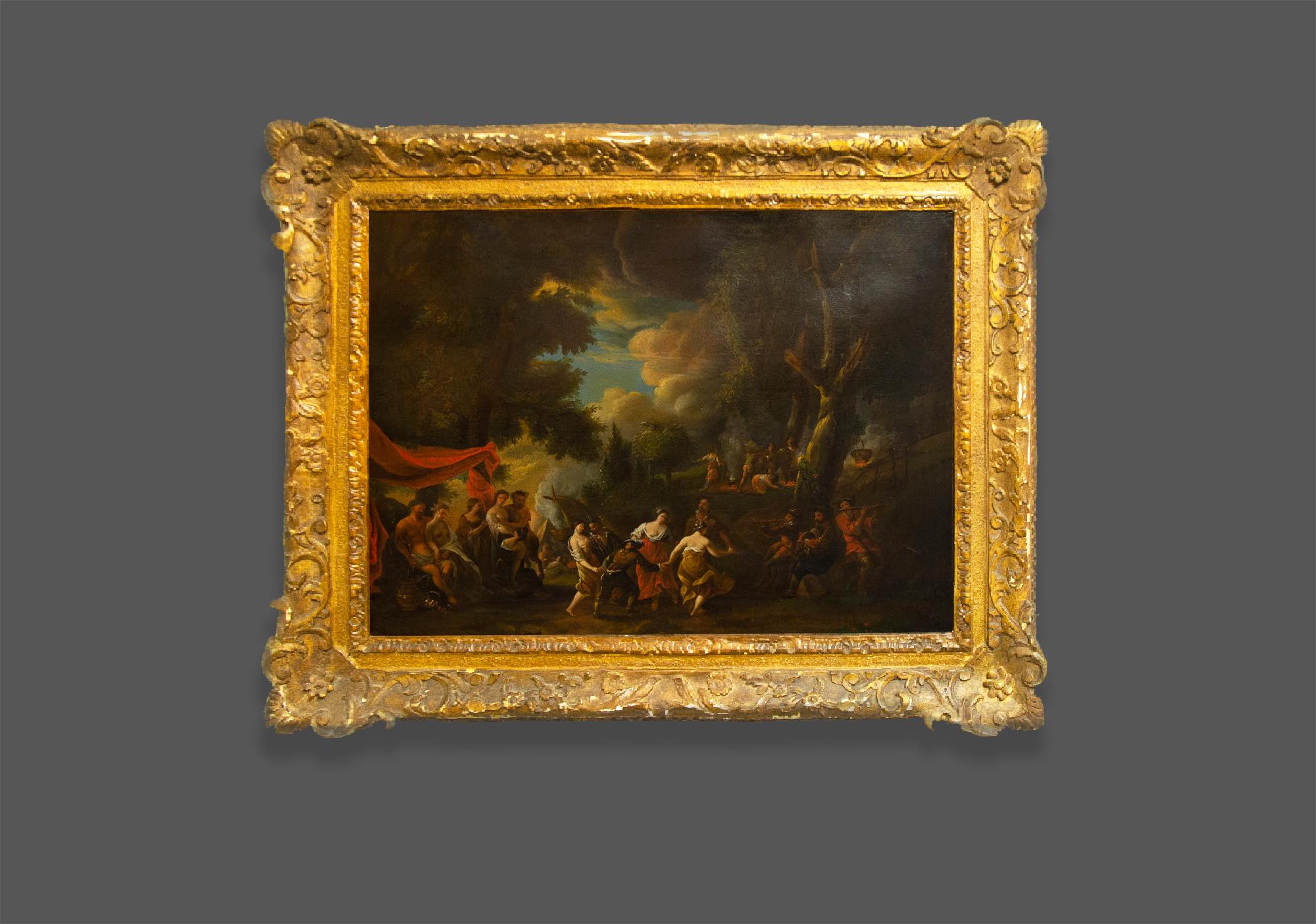 This painting, probably by a follower of Jan Van Neck from the Dutch School, represents a Bacchanal (also known as Bacchanalia). Although the content of the original festivals known as Bacchanals, which originated in ancient Greece and Rome, is relatively unknown today, some historical accounts about these extravagant events do exist, and some scholars tried to reconstruct their history.

Titus Livius (Livy, circa 64BC – 17AD), a Roman praetor who lived in the Augustan period described these unusual celebrations in his History of Rome. It is one of the few sources modern scholars can use to reconstruct such events (bearing in mind potential biases in the accounts). Ovid’s Metamorphoses also contain references to Bacchanals. These were wine festivals in honour of Bacchus, the Roman god of wine and ecstasy (He is known as Dionysus in Greek mythology). Such festivals were more of an unofficial cult of Bacchus than a public and institutionally backed form of celebration.[1] [2]

The rise of the cult of Bacchus in ancient Rome, according to Livy, came from Etruria, via a Greek cultist who claimed expertise in rituals and sacrifices and who held nocturnal festivals.[3] Livy claimed that Bacchanals were a breeding ground for violence. His explanation highlights that the sexual immoderation typical of these events meant that participants (of both sexes and especially the young ones) were often involved in sexual abuse and assault without any way to escape the violence. Cries for help were often silenced by the loud drums, cymbals and wailings.[4] Rome was known for its tolerance with rituals outside of the scope of the traditional Roman practices. Livy blames such flexibility for the uncontrolled spreading of the Bacchic cult throughout Rome and its related celebrations that were corrupting Roman society and were a potential cause of concern for the security of Roman citizens.

Ralph E. Carpenter (1909 – 2009) was a conservationist living in New York, USA who restored many of the historical buildings of the city. Although his initial career focused on insurance, pension plans and investment banking, his expertise on antiquities and decorative art incited him to collect a large number of artworks. Thanks to his knowledge, later in his career he devoted his time as a full-time art consultant until his death in 2009. He worked with Christie's as a consultant for the decorative arts and antique department, a position that helped solidify his expertise on the subject.

[1] Gildenhard, I., and Zissons, A., ‘The Bacchanalia and Roman culture’ in Ovid: Metamorphoses, 3.511-733. Latin text with Introduction, Commentary, Glossary of Terms, Vocabulary Aid and Study Questions, Open Book Publishers, 2016, 65-67.