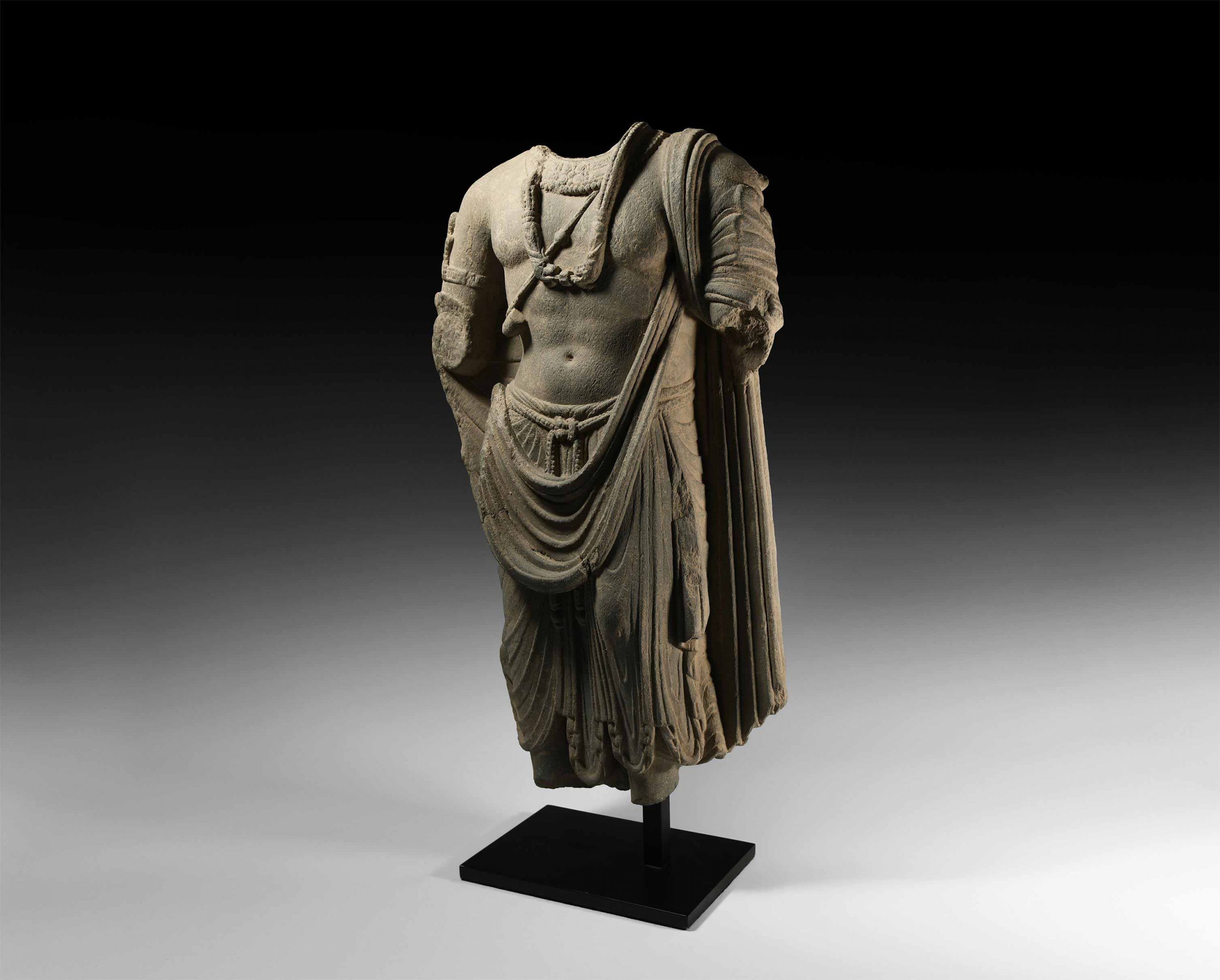 This sculpture of a Bodhisattva Maitreya, dated circa 1st – 3rd century AD, is made of finely carved schist. Schist is a medium-grade metamorphic rock which was commonly used for Buddhist sculpture in the Gandharan region (modern north-west Pakistan and northeast Afghanistan).  Today it is thought that the schist was sourced by sculptors in the Swat deposits in northwestern Pakistan due to the presence of the alumina-rich chloritoid-paragonite-muscovite-quartz schist.[1]

A Bodhisattva Maitreya (also known as Ajita in some Buddhist literature) is considered to be the Buddha of the future. Buddhist tradition believes this figure will appear in the future as a restorer of reason by preaching the pure dharma ('Law'). The Maitreya is therefore considered to be the present Buddha's successors (who known as the Gautama Buddha). His restorative purpose linked to the dharma is related to a prophecy which foresees that the Law preached by the present Buddha will be forgotten by humans. In the Greco-Buddhist art of Gandhara, the Bodhisattva Maitreya was one of the most popular figures to be represented by sculptors, alongside the Gautama Buddha. The Maitreya is the earliest example of a Bodhisattva that developed a cult. Mentions of the Maitreya can be found in scriptures as early as the 3rd century AD. The etymology of the name Maitreya derives from the Sanskrit maitrī which means friendliness/friendship, from which the word Mitra (friend) derives. The Maitreya is represented in paintings and sculptures both as a bodhisattva and as a buddha.

The Gandhara region also went from Persian hands to Greek rule after Alexander the Great Conquest. It stayed open to contact with the Indian civilisation as well as with the remote regions of the Roman empire.[2] The period in which this artwork was made (1st-3rd century AD) explains the passionate reference to the elegance of Hellenistic art from Greece.[3] The use of a contrapposto is an apparent reference to classical art. The contrapposto is a typical strategy devised by classical sculptors that comprise in tilting the hip of the figure so that the posture is off-axis; clearly shown in this statue through resting all the weight of the body on one straight leg while the other is slightly bent.

Moreover, on the figure, the jewellery is restrained yet sophisticated and finely carved as seen with the floral collar and draped festoon. The textile patterns are minimally suggested, while the thin and delicate texture is exceptionally carved. The dress worn by the Maitreya is known as a dhoti loincloth; one-piece garment wrapped around the waist and legs and kept in place by a belt. Traditional forms of the dhoti are still used as an ethnic costume in India.

[3] Rowland, B., ‘Bodhisattvas or deified kings: a note on Gandhara sculpture’, Archives of the Chinese Art Society of America, 15, 6-12.