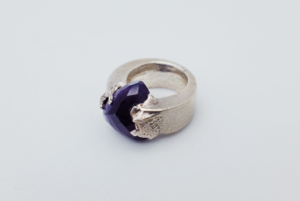 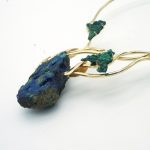 "Jocelyn Burton is one of life's originals, an explosive, opinionated, bubbling being, all of which is amply reflected in her work. Everything is very exact and technically perfect. Her drawings for commissions rank as works of art in their own right. In all of this, she stands at the end of a centuries-old tradition; she is fully conversant with so many of the skills once taken for granted but which are now in danger of being lost. She also works firmly within what one might describe as the classical tradition. If that evokes in some people's minds objects which are dull and conventional you could not be wider of the mark. There's always a twist and madness to her work which makes it belong very much to the present. In her work, the past is reborn in a form that could only ever belong to the Twenty-First Century."

In 1995 Burton won the United Kingdom Jeweller Award for best design in silver.

Burton had the first piece of platinum to be hallmarked at the London Assay Office in 1973 when hallmarking for platinum was introduced under the Hallmarking Act of 1973 and platinum became a recognized metal under the Vienna Convention on the Control of the Fineness and the Hallmarking of Precious Metal Objects. This piece is at Goldsmiths’ Hall.

She became a freeman of the Worshipful Company of Goldsmiths in 1974.

Burton is a member of The People’s Supermarket, opened in Lamb’s Conduit Street by Arthur Potts Dawson in 2010.

Burton regularly appeared in the Channel 4 documentary of the same name in 2011.

In 2012 Jocelyn appeared on Radio 4’s midweek program for an interview, celebrating 40 years of her career.

Burton’s commissions include a silver table fountain for the Fishmongers’ Company, an 18ct gold and sapphire chain for the Butchers’ Company, an offertory salver for Lichfield Cathedral and a centerpiece commissioned by Sir Roy Strong to launch the Modern Plate collection of the Victoria and Albert Museum (where it is on permanent exhibition). Recently she has completed a set of magnificent silver wall sconces for a City financial institution and the Pataudi Trophy. This trophy was commissioned by the MCC to commemorate the 75th anniversary of India’s Test debut and was presented when the Indian cricket team toured the UK in 2007. The MCC loaned the trophy to be exhibited in November and December 2012 at Burton’s Bentley & Skinner Exhibition.

Her work features in private and public collections including, 10 Downing Street, York Minster, Longleat, St Paul’s Cathedral and the Fitzwilliam Museum, Cambridge. Apart from major commissions, Burton has created a range of domestic silver as well as jewellery using gold, silver, precious and semi-precious stones. All this work is based on her own designs – from preliminary sketches to finished colour drawings.

Jocelyn was born in Wales in 1946 and is the daughter of RAF officer Roland (Monty) Burton. She intended to read modern languages at Cambridge but decided to train as a silversmith at Sir John Cass College in London where she studied under Jack Stapley.

In 1967 she won the De Beers International Award for the design of diamond jewelery. Three years later she set up her own studio and workshop in London. In 2003, she received the City and Guilds of London Institute Gold Medal – Prince Philip Medal.