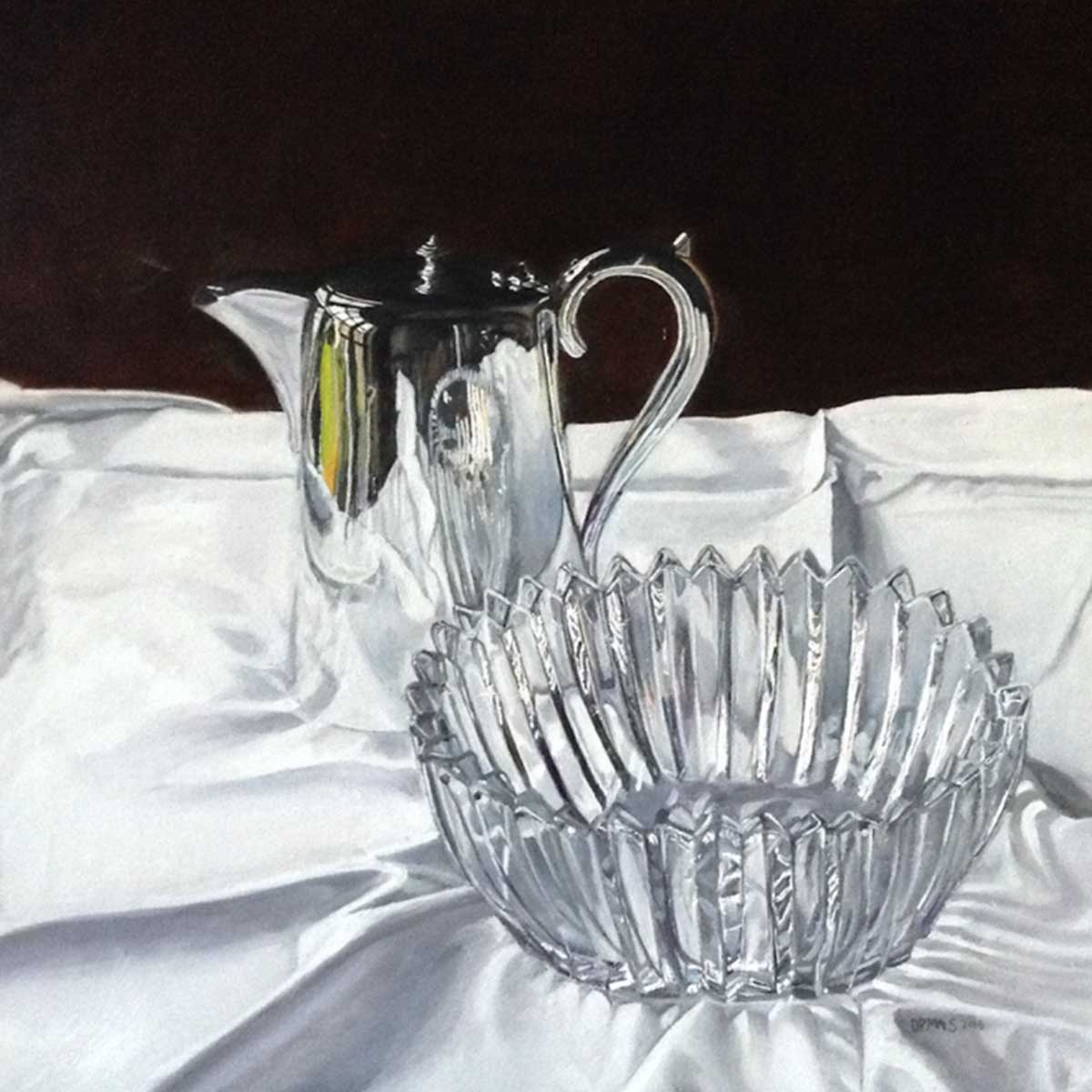 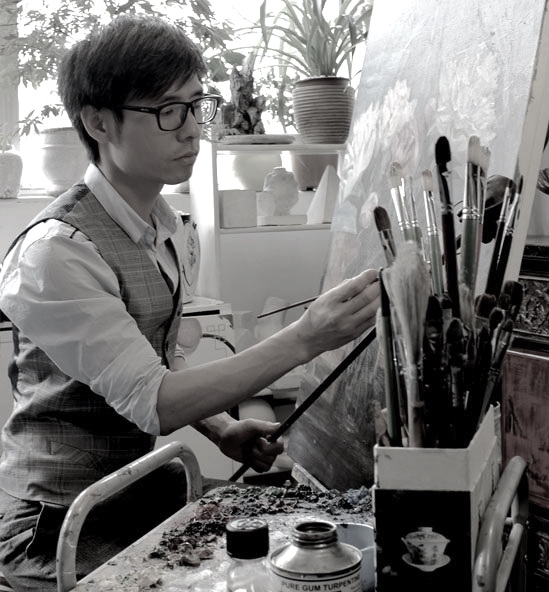 Yinjie focuses on religions and beliefs, their literary contexts in China and Europe, and their impact on everyday existence. He uses a vocabulary that is accessible to his global audience and has references to both Eastern and Western philosophies and social histories. In his most recent work, Yinjie has tended to focus on some of the most unexpected subjects to create symbols carrying the problems of contemporary society.

Yinjie exhibits extensively throughout the UK and internationally. His most recent solo shows were held at the Museum of East Asian Art, Bath (2012) and Museo Ramon Maria Aller Museum, Lalin, Spain (2012). In addition to this, his work has been selected by the Victoria and Albert Museum, London, for the Chinese New Year Celebration and was exhibited in the Raphael Gallery (2011). He has also showcased his works at the UK Chinese Artists Biennale in Asia House (2013), Dulwich Picture Gallery (2014), The Mall Gallery (2013), the Shanghai Biennale (2012), Barbican Art Center (2012), Today Art Museum in Beijing (2011), The Sunshine Art Museum in China (2010), Ourense Museum in Spain (2011), Shengyang Industrial Museum in China (2010) and the Sunshine International Art Museum, Beijing (2010).

He has worked and been commissioned by international renowned companies such as HSBC, PWC, Viktor & Rolf, Giorgio Armani, The Royal Academy of Arts, Givenchy, Harrods and Selfridges & co.

In 2015, Yinjie Sun was shortlisted for the Sky Art Landscape Artist of the year. The program, which has been filmed in Waddesdon Manor, Trelissick, and Lyme Park, featured several artists producing a timed painting inspired by their surrounding environment. The programme was broadcast by Sky Arts.

His work has appeared in numerous publications such as BBC, Eastern Art Report, The State Council News Office of China, People’s Daily Newspaper, China News, Art China, and is represented in public and private collections in Britain and worldwide.

• Collaboration with Givenchy – Yinjie Sun has created exquisite hand painted floral patterns on the glass of a new collection of perfumes. The products have been displayed on the ground floor at Harrods and the event has been featured on Givenchy’s social media platforms. The intricate hand-crafted designs are based on the concepts behind the fragrances and their floral notes. Ten different designs for ten different bottles. This exhibition started 1st October and ran until 20th October 2016. For more information visit Givenchy and Harrods’s websites.

• Invited by the School of History and Cultures, University of Birmingham to organise a Calligraphy and Chinese painting workshop for their undergraduate students.

• Invited by BBC Worldwide for a Chinese painting and Calligraphy workshop.

• Commissioned by Selfridges&Co to create a series of paintings to be displayed at their department store in London.

• Invited by the Royal Academy of Art to lead their October Chinese painting / Calligraphy workshop.

• Shortlisted for the Sky Art Landscape Artist of the year 2015. The program, which was filmed in Waddesdon Manor, Trelissick, and Lyme Park, featured several artists producing a timed painting inspired by their surrounding environment. The programme was broadcast by Sky Arts.

• Commissioned by the renowned fashion brand Viktor & Rolf to decorate a line of their perfume bottles and gift card designs. The bottles were exhibited at Harrods. To celebrate this collaboration, Harrods hosted a workshop by Yinjie from the 3rd to the 16th of May.

• Commissioned by Selfridges&Co. to create art pieces to be used on their gift cards.

• Invited by PricewaterhouseCoopers (PWC) to lead a drawing workshop for their employees.

• Participated in the ‘Open Exhibition’ at Dulwich Picture Gallery, London, with ‘Snowy No.1′ and ‘Snowy No.2′. The exhibition was curated by Sackler Director Ian A C Dejardin.

• Commissioned by HSBC, Yinjie Sun organised and arranged a series of Chinese Painting and Calligraphy workshops as part of HSBC’s in-branch interactive activity sessions. These workshops took place in a variety of branches around the UK, including in Leeds, Manchester, London, Liverpool, Sheffield and Reading.

• The painting ‘Crucifixion’ was selected by Artgemini Prize at the Rebecca Hossack Gallery, London.

• The painting ‘Railway Station’ was selected by The Sunday Times Watercolor Competition at The Mall Gallery, London.

• The painting ‘Life and Death’ was selected by Caissa Rising Artists Competition at the Today Art Museum, in Beijing, China.

• Participated at the 1st Biennale of Chinese Artists, at Asia House, London.

• Participated in the “Zhongshan Park Project “ and had 3 works exhibited in the group show “On the Way Home” at the 9th Shanghai Biennale, in Shanghai, China.

• Solo show at the Museum of East Asian Art, in Bath, UK.

• Group show “Fusion”, at the Institute of Physics, in London.

• Group show “Once Upon A Winter Time”, at Hackney Downs Studios, London.

• Group show “The First Principle”, at The Gallery In Cork Street, London.

• Group exhibition “Now and Then”, at the Museum Municipale de Ourense Spain.

• Group show “Dragon’s in the Lion’s Den-Chinese Contemporary Art, from Beijing to London”, at the Forman’s Smokehouse Gallery, London.

• The painting “Peach Orchard” was selected by the Victoria and Albert Museum and exhibited in the Raphael Gallery, London.

• “Works on Canvas”, at the Riverside Studios, London.

• Autumn exhibition, at the 77 Gallery, London.

• Since 2011, curator in Creative Network Partners in London.

• Main curator of the group show “The First Principle” at The Gallery in Cork Street, London.

• The main curator for the group show “Dragon’s in the Lion’s Den – Chinese Contemporary Art, from Beijing to London”, at the Forman’s Smokehouse Gallery in London, UK.

• Main curator of the UK section in the 2010 “The 6th Culture and Art Festival of Songzhuang China”, at the Sunshine International Art Museum in Beijing, China.

• Coordinator of the “Trace Your Memory of London Chinatown Photo Contest”, at the Charing Cross Library in London.

• The Painting “Here Today, Gone Tomorrow ” was published in People’s Daily Newspaper. This is the biggest newspaper for the Central Committee of the Communist Party of China.

• China News published a review of Sun’s group show “Dragon’s in the Lion’s Den-Chinese Contemporary Art, from Beijing to London”. China News is the second largest state-owned news agency in the People’s Republic of China. It serves mainly overseas Chinese and residents of Hong Kong, Macau, and Taiwan.

• Wrote the article “A glimpse of Contemporary British Art” which was published in the catalogue for the “2010 6th Culture and Art Festival of Songzhuang China” at the Sunshine International Art Museum, the biggest art museum in China.