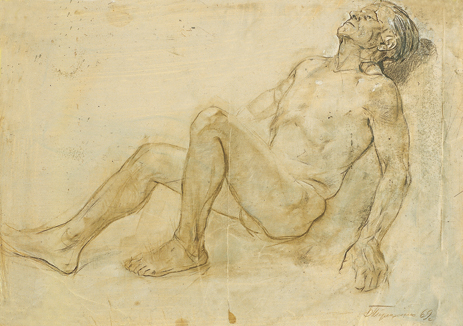 Tereshenko was born in Irkutsk, in Siberia, in 1941, to a family who had been deported from the city of Moghilëv, in Byelorussia. After the death of his father, he spent his childhood in Kansk, a city on the borders of the country. This was the location of the Krasnojarsk lager, where persecuted prisoners from various nations and religions were detained alongside many uncomfortable intellectuals.

He attended the Irkutsk Art School and later taught in the school of Kansk and worked in the Il’ja Repin Art Institute of Leningrad. He was also the director of an art school for children in Kaliningrad. In 1974 he became a member of the USSR Artist Union and in 1975 he organised his first exhibition. Between 1970 and 2003, he has participated in more than one-hundred exhibitions in Russia and in the rest of Europe. He now lives and works in Moscow.

His artistic formation took place in the more remote regions of the Soviet Union, in a borderline city that was also the location of a lager for intellectuals. This is where he met musicians like the great Svjatoslav Richter, painters, historians and film-makers who were to transform that city into a utopian haven for art and culture. This light-heartedness was ever-present in Tereshenko’s works, alongside the colours and lights of Russia.