The China Exhibition of the 2018 edition of the Sunny Art Prize will take place at Harmony Art Gallery in Shanghai between April 12th and June 12th 2019. The artists shortlisted from the previous London show and that will be part of this group exhibition in China are Stephen Doyle, Stefano Zaratin, David Antonio Loureiro, Stephanie Kilgast, Wei Tan, Shinyoung Park, Anca Stefanescu, Kishwar Kiani, J. Jie Li, Jeongkeun Lee, Mi-Young Choi, and Juheon Cho.

The selection of artists from all over the globe will provide audiences in the East to further re-elaborate the themes explored during the London exhibition. The variety of practices, from drawing and painting to mixed media, sculpture, photography, and installation will allow for wider engagements towards issues relating to contemporary socio-economic contexts. Religion, immigration, borders, gender and sexuality, identity, and climate change are just a few of the critical topics these international artists wish for visitors to confront. Therefore, the scope of the exhibition, trough travelling artworks and ideas, is to let audiences from different global contexts respond in culturally unique ways to problems and issues that affect us all on a universal level.

The Sunny Art Prize was also established with the intent to help artists reach new markets that can support their practices in the long term. Access to one of the strongest art markets in the world in China can help artists unlocking new possibilities, and reach collectors otherwise unavailable through conventional exhibitions. The sustained exchange between the East and West through sound cultural projects, such as exhibitions and residencies, devised in partnership with Chinese art institutions, is at the foundation of what the Sunny Art prize stands for.

Examples of work and artists exhibited in Shanghai 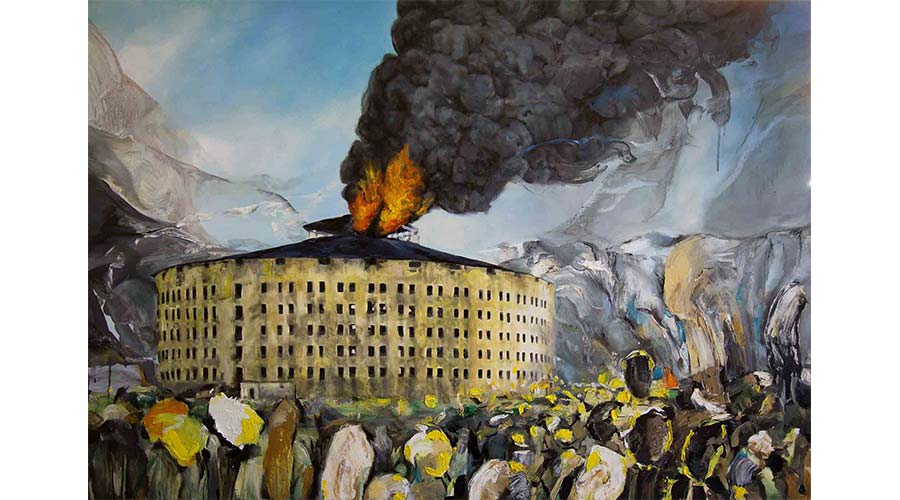 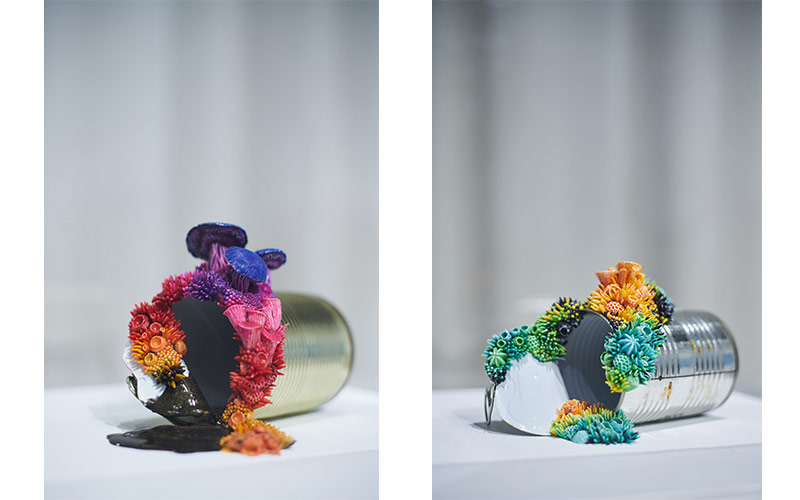 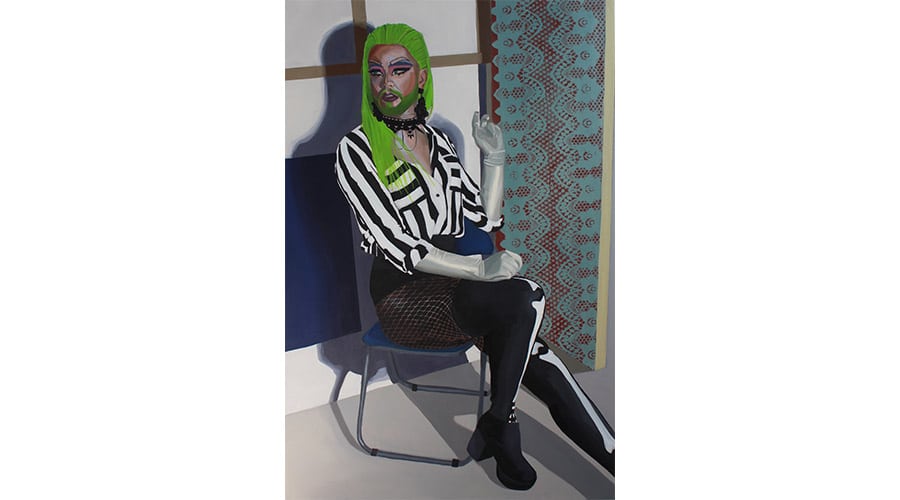 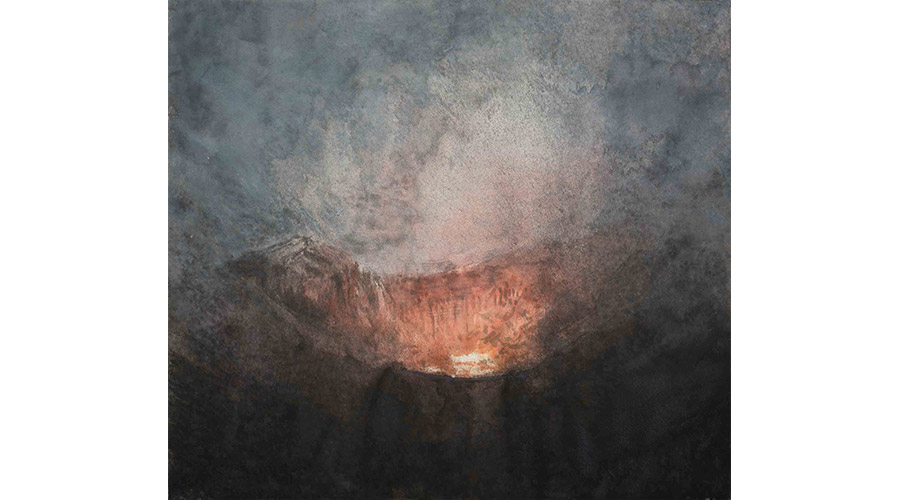 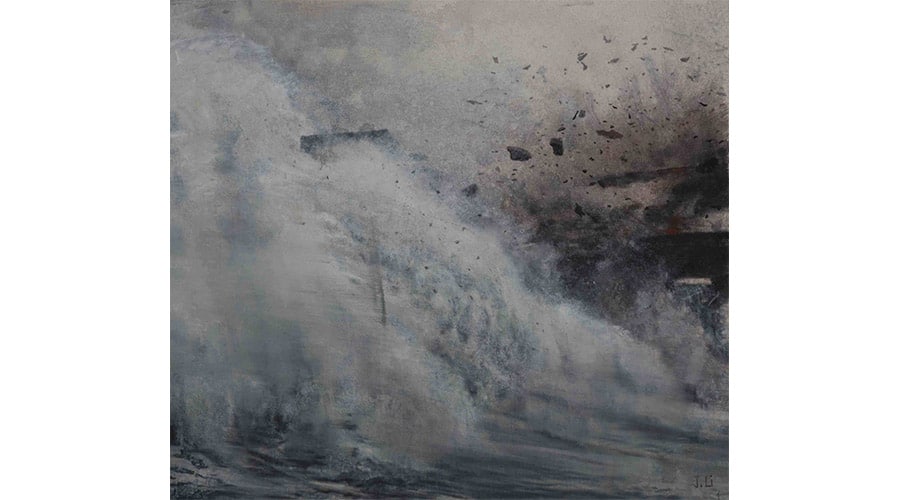 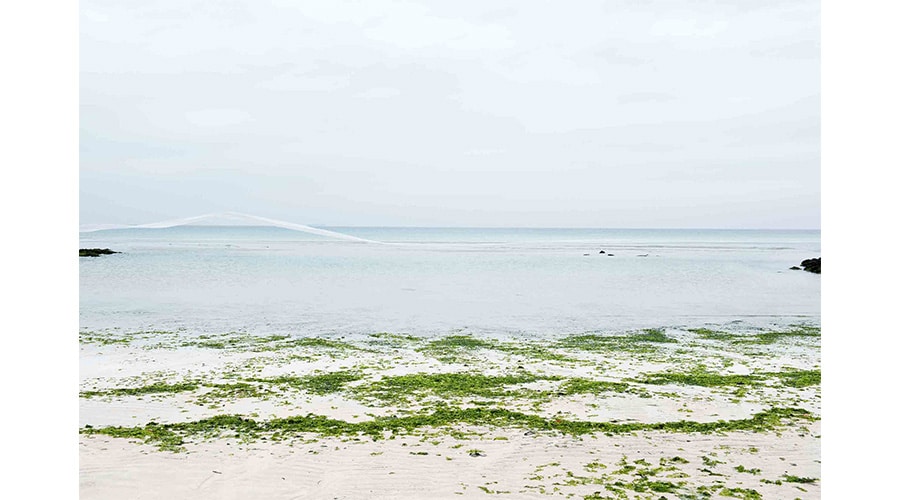 Covered in Vinyl (from Despaysement series) by Jeongkeun Lee

The shortlisted work ‘Performing the Feminine II’ is inspired by the iconic drag ‘ball culture’. In particular, the drag ball scene illuminates themes revolving around race, gender, and sexual orientation within society. Drag balls are competitions that consist of individuals, often drag queens, performing various genders and social groups. The shortlisted mixed media painting is a commentary on the fluidity of gender roles. Doyle’s painting provides a platform for discussion on how an antiquated social structure has limited and reduced gender identity to a fixed, binary status. Through the drag performance represented in ‘Performing the Feminine II’, the exploration and interplay of femininity versus masculinity are put on display. The choice of materials in the painting emphasises such interplay. Metal, wood, hard angles, and solid colours symbolising the ‘male’ are juxtaposed with fabrics, light patterns, and vibrant colours associated with femininity.

Stephanie Kilgast is a French artist working with ready-mades and found objects such as plastic bottles and aluminium cans. The artworks she chooses are usually sourced from trashcans and question the excessive wastage currently governing the lifestyle of the 21st century.

Her work is an ode to life, where plants and fungi meet insects, animals, and minerals. Their bright and colourful tones dominate over the pale and subdued colours and shapes of the found objects. The colourful swirls of nature develop on these ready-mades, thus stimulating a dialogue between humanity and nature. Those very items which are typically trashed, discarded, and forgotten are here brought to the foreground. The viewer is invited to observe not only the pieces themselves, but also the environmental crisis humanity has created and question the lost balance between human activities and nature.

Readily recognisable by its hybrid figures, fragmented objects, and spatial indeterminacy, the artwork of David Antonio Loureiro is first and foremost a statement about rupture. By playing with the viewer’s perceptions, the characters, as well as the indoor and outdoor spaces, tend to become confused or disappear, then rematerialize in the composition. This process is also emphasised by the intertwining of figuration and abstraction, as visible in ‘Le Fusillé Souriant’.

Using historically identifiable figures for his compositions, usually attributed to classical painting, David hopes to stimulate his audience to recognise the subjects of the paintings. Despite their architectural feel, his paintings use a mixture of impasto, transparency, and superimpositions to provide the content with a surprising materiality. The intention is to generate doubts and questions about the events unfolding in the artworks, rather than certainty, in the viewer's mind.

Mothered by algorithms and trapped in an age of extreme mechanisation of the world, David’s paintings also aim to stimulate the idea of a reconciliation with oneself and the human condition. These ‘other’ spaces deploy micro-narratives using experiences from our own human and historical existence. Therefore, his paintings question people’s relationship with the world and our figures of authority; they question what it is that shaped, shapes, and will shape the human condition.

Li expresses love, hate, and desire as rooted within the depths of human nature. Such expression is achieved by overlapping figuration and abstraction in her paintings, using the natural changes and disasters that occur in her landscapes as metaphors for human emotions and sensibility.

Li primarily works with watercolours. Yet, as visible in artworks from the ‘Echoes of the Silence’ and ‘Fire & Desire’ series, she challenges the conventional views of this medium, which is usually conceived of as delicate, fragile, and gentle. In her paintings, the medium is not so transparent, not so spontaneous in some parts, and not so ‘watercolour’ anymore. The brushstrokes are thick and substantial, almost concealing the nature of the medium.

Jeongkeun Lee, the winner of the Sunny Art Prize 2017, is a photographer who primarily works with staged landscapes and environments in the form of installations then reproduced and re-contextualises them through the photographic medium. His ‘Despaysement’ and ‘Personal Ritual’ series attract positive feedback for their ability to bridge such staged counter-realities and the real world. He does this by exploiting photography as a tool to conjure parallel worlds impregnated with ritualistic symbolism, using photography as a mediator between spaces, people and objects.

This year the art residency programme devised by the Sunny Art Prize in partnership with Harmony Art Gallery will take place in the historically rich Gao Feng Chan Temple, China. The artists selected (from the original list of artists that exhibited in the Sunny Art Prize 2018 London exhibition) and that will participate in the residency are:

According to the ‘Mo Gan Shan Mountain Records’, this temple was built in the first year of Liang Tian Jian during the Southern and Northern Dynasties (AD 502). From the Tang Dynasty till the Year of the Sui Dynasty (AD 1274), there was a Zen master from the Lin'an Longxu Mountain who moved into this place, and he renamed the temple as Linji Daochang. In the year of the Southern Song Dynasty's demise (AD 1279), the Miao Zen Master retired to Tianmu and drilled a cave room in the mountain. He named the cave ‘Dead Pass’ and remained there in solitary confinement for 15 years while practising meditation. He is today known as the East Peak Buddha. During the first year of Yuan Zhen (AD 1295), the Miao Zen Master passed away, and the Emperor Yuan Wuzong’s honoured him with a title: ‘The Zen Master of Fo Ri Pu Ming Guangji’. On that day, the temple was named after the local mountain.

My work is primarily about queer culture and gender identity. For me the most beneficial thing about receiving this prize is not really about me or the gallery. It is about giving a minority group a platform and an audience that ordinarily this work would not have gotten. It is really important that people do address this and that they consider it because ordinarily they would not engage with this topic as well.

Today, in the pursuit of material desires and following a crisis in the balance of the natural world, artists must bravely use morality, conscience and human values to express the other balanced side of our lives; one that is sensitive to the outside world and includes sensible politics, the economy, vulnerable groups, and the natural environment.

I believe that these journeys through different cultural settings with a programme like the Sunny Art Prize are a way to understand ourselves and ultimately try to know who we are and what our place in the world is.

As artists, we should have a broad outlook on life and a world view. Understanding different cultures will enrich all artists’ cultural outreach. Such knowledge allows artworks to have more depth.

During the residency, I wanted and had the opportunity to explore the balance between traditional Chinese culture versus its global cultural counterpart, as seen in ultra-connected cities such as Shanghai. The experience of this art residency placed me in the middle of this balance, between exoticism and futurism.

I believe the role of the artist should be one that speaks to different audiences to help connecting societies by bridging their cultures through the power of the visual artefact. A programme like the Sunny Art Prize provided the tools to look back at the work I have made as an artist and re-evaluate it with new and different meanings while observing novel reactions from the audience.

Check the work of the participating artists on the dedicated page with the work of all the shortlisted artists for this edition of the Sunny Art Prize.

The Sunny Art Prize, in collaboration with leading Chinese national and international cultural institutions, launched a series of new artist residency programmes. For each edition of the Sunny Art Prize, we will provide the winning artists with the opportunity to be part of a residency in culturally dynamic and significant places in China.

The idea of international cultural exchange, as provided by this open call for artists, was envisioned to complement the existing programme of international exhibitions from London to China. While the artworks shortlisted for the Art Prize travel to new exhibiting locations and engage with new audiences, we believe artists should also travel and exchange knowledge about their practice with new communities around the world.

Through direct interaction with Eastern culture, the artist residency aims to provide a profound, positive change to your practice as an artist as well as to you as a person.

Apply for the Sunny Art Prize now and experience the next level of art residencies.

The Sunny Art Prize is an international art prize hosted by Sunny Art Centre, London. This fine art competition in the UK is a global platform offering art opportunities to emerging and established artists to showcase their artworks internationally. The exhibiting galleries are located in cities across the world,  including London, Beijing and Shanghai. The art contest will also give the art prize winners the opportunity to be part of a one-month artist residency. The Artist Residency Programme is organised in collaboration with established Chinese art institutions, and it provides the chance to engage with historically and culturally rich places in China.

The art competition welcomes submissions from all over the world. The diversity of the prize is also reflected by the variety of art practices it represents, from two-dimensional work such as paintings, drawings and photography to three-dimensional sculptures and ceramics, as well as contemporary installations, mixed media artworks, video and digital work.