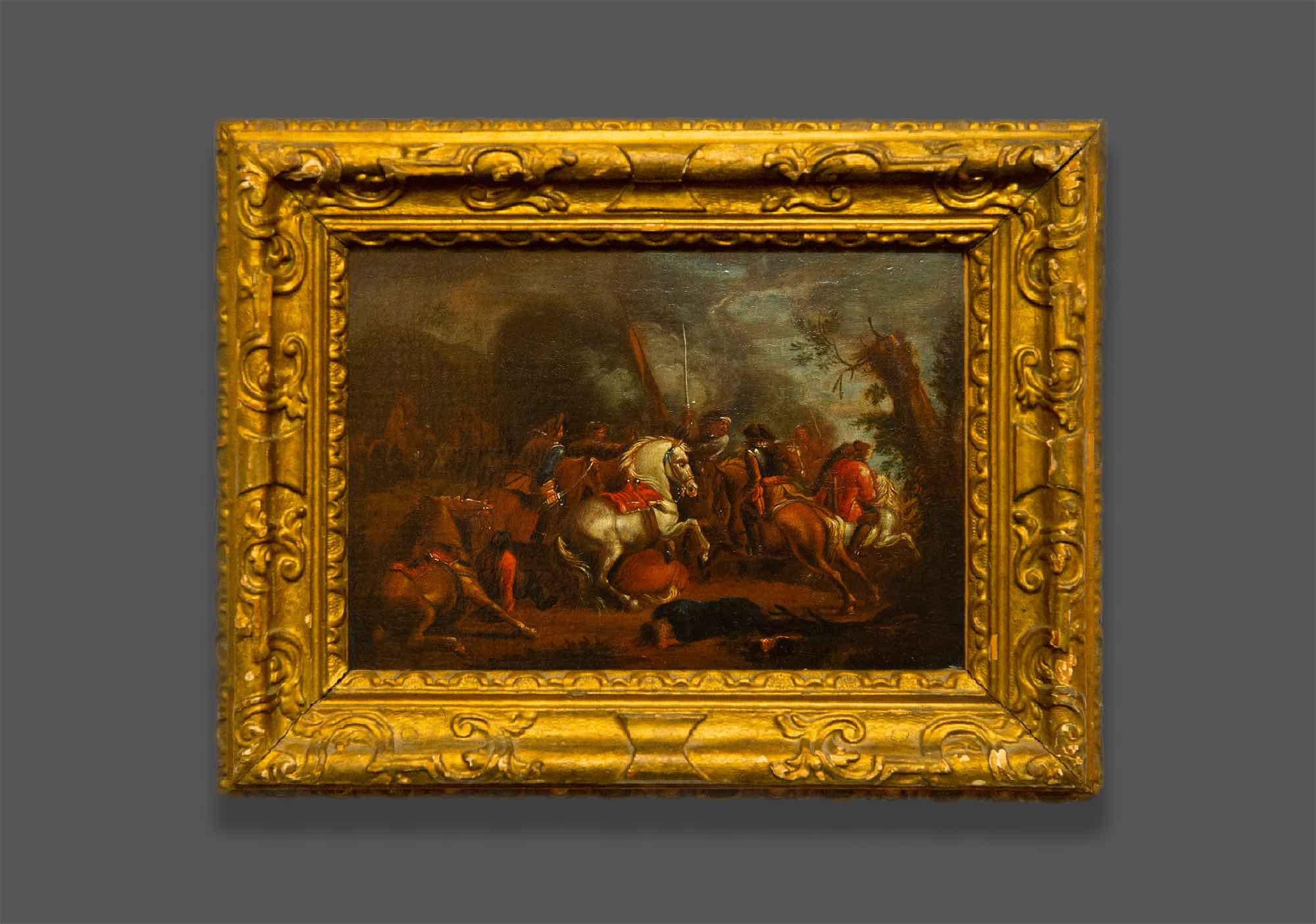 The two paintings are attributed to Rubgan das George Philip, from the circle of painter Georg Philipp Rugendas I (Augsburg, 1666 – 1742). "Circle of …" means a work by a closely influenced artist from the same period and same style.

This painting depicts a battle between cavalry skirmishes. Historically, skirmishers were light cavalry soldiers deployed in open formations rather than in the more traditional straight line formation. Thus, they were used as hit-and-run units so to disrupt the enemy's movements and morale through light attacks. Cavalry skirmishes, unlike regular army units, had the advantage of being able to withdraw if superior enemy forces confronted them. Their principal role can then be summarised as defensive. Cavalry skirmishes protected the main army and heavy infantry/cavalry through these first disruptions to the enemy. This kind of cavalry was first deployed in ancient times, including the Greeks (e.g.Spartans) and the Romans (e.g. during the famous siege of Carthage and by Caesar during the Gallic Wars).

Paintings of battles were common in the circle of Georg Philipp Rugendas I.  Rugendas (1666-1742) was an acclaimed painter of battle/military genre.   He was born in the Free Imperial City of Augsburg, known today as the Bavarian region of Germany (Germany did not exist as a nation in the contemporary sense until 1871 when the country as we know it today by its name was unified for the first time). Viennese, Venetian and Roman pictorial influences were incorporated in Rugendas style thanks to his sojourn in the respective cities. These influences were then picked up by his followers.

Ralph E. Carpenter (1909 – 2009) was a conservationist living in New York, USA who restored many of the historical buildings of the city. Although his initial career focused on insurance, pension plans and investment banking, his expertise on antiquities and decorative art incited him to collect a large number of artworks. Thanks to his knowledge, later in his career he devoted his time as a full-time art consultant until his death in 2009. He worked with Christie's as a consultant for the decorative arts and antique department, a position that helped solidify his expertise on the subject.